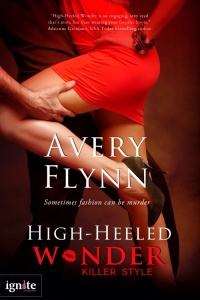 Sylvie Bissette may be one of Harbor City’s youngest glitterati, but only her best friends know her most closely guarded secret. She’s the woman behind The High-Heeled Wonder, the newest must-read blog for fashionistas everywhere. Gossip, fashion advice, exposés. Too bad some people can’t take a little criticism. When an internet troll discovers her secret identity, Sylvie turns to security expert Tony Falcon for help. The investigator from the other side of the tracks is the olive oil to her Evian water, but it’s not just her temper he’s inciting…

Tony Falcon wouldn’t know a kitten heel from a tabby cat, but since most of the bad guys he tracks down aren’t wearing stilettos, it’s never been a problem…until he meets Sylvie. The feisty fashionista may be his best chance at catching the criminals responsible for his best friend’s murder. But solving that case means going after the people Sylvie cares about, and soon the attraction—and the danger—has him wondering if solving the case is worth hurting the woman he can’t stop fantasizing about …

When Sylvie’s stalker escalates from sending nasty e-mails to trying to run her over in broad daylight, Tony goes undercover as Sylvie’s boyfriend to infiltrate the close-knit fashion community. In a world full of overblown egos and cut-throat ambition, Tony and Sylvie must work together to find her revenge-obsessed stalker before Sylvie ends up with a literal knife in the back.

Bogie Meets Gracie Lou Freebush and they “Make it Work”

Sylvie Bissette was the mastermind behind the popular, “High-Heeled Wonder,” a blog that exposed all of the fashion industry’s dirty little, and not so little, secrets.   Her scoops garnered her huge a fan base, the ire of both a magazine’s editor-in-chief and a self-absorbed, talentless designer and her very own cyberstalker.   This troll indicated he/she would stop at nothing to reveal Sylvie’s identity and take down her blog.

After a very public attempt on her life, she relented to having Tony Falcon, former cop turned security expert, pose as her boyfriend to discover who was threatening her.    At the same time, he was trying to track down the criminals who killed his best friend.   Tony, who never had a problem maintaining his distance from his charges, met his match in feisty Sylvie, who was determined to “help” with the investigation.    As the threats against Sylvie escalated, so did Tony’s innate need to protect her.   The more time they spent together, the more problematic their mutual attraction became.   When they finally gave in to temptation, it culminated in a fully clothed, sultry exploration that only heightened their appetite for each other.

Clues were pieced together to deduce the identity of the perpetrator, while Sylvie and Tony continued to become close.  He narrowed down the list of suspects.  Unfortunately, that list included people Sylvie cared deeply for.  Hell-bent on retribution, yet blinded by hurt, Tony uttered one of the most touching boy-loses-girl lines “You’re going to hate me later.  You will and when you do, promise you’ll give me the chance to fix it,” as he broke Sylvie’s heart – along with his own.

Like a delightful visit to Imelda Marcos’ legendary shoe closet, High-heeled Wonder (A Killer Style Novel) (Entangled Ignite) took readers on a sexy, chick lit ride worthy of early Helen Fielding or Sophie Kinsella.   Additionally, Avery Flynn added classic thriller plot twists, thrills and surprises.  Her characters were multi-layered, balanced and intelligent.  Sylvie was a fully developed, professional woman who overcame a tragic childhood and Tony was the wounded alpha, with a heart of gold, who needed her to begin to heal.  A colorful and motley crew of secondary characters – their families, friends, and coworkers, provided further action, suspense and comic relief.

Both my inner fashionista and nerd girl appreciated the references to the fashion industry, as well as, the nod to Doctor Who and the gaming world.   High-heeled Wonder (A Killer Style Novel) (Entangled Ignite) earns an old-school, Men on Film, two-snaps in Z-Formation and my recommendation as a great book to curl up with on a cold winter’s day.  I look forward to Ms. Flynn’s next book.

Disclaimer:  I received an ARC from the author in exchange for an honest review.   Then purchased the book for my private library.

Avery Flynn has three slightly-wild children, loves a hockey-addicted husband and is desperately hoping someone invents the coffee IV drip.

She fell in love with romance while reading Johanna Lindsey’s Mallory books. It wasn’t long before Avery had read through all the romance offerings at her local library. Needing a romance fix, she turned to Harlequin’s four books a month home delivery service to ease the withdrawal symptoms. That worked for a short time, but it wasn’t long before the local book stores’ staffs knew her by name.

Avery was a reader before she was a writer and hopes to always be both. She loves to write about smartass alpha heroes who are as good with a quip as they are with their *ahem* other God-given talents. Her heroines are feisty, fierce and fantastic. Brainy and brave, these ladies know how to stand on their own two feet and knock the bad guys off theirs. 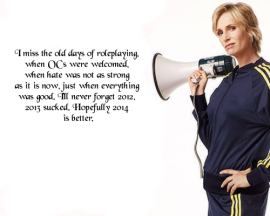 2013 was filled with lessons.  I learned to listen to my inner voice and my true self more than ever.  I also learned there were things that I was not meant to conquer.  While I was temporarily upset, I ultimately felt elated.  The weight was removed from my chest and I was able to breathe again.  It was empowering.  Sometimes the best lessons learned are those associated with loss.  They may be painful, and show us parts of ourselves we may not be comfortable or satisfied with, but the mirror they hold up to us reflects reality, and helps us move forward.  Grieve, for what was lost,  if we must.  Then grin, as we say, “Whew! Time to try something new.”

Books were my constant companions and led me to amazing friendships with readers, authors and bloggers.  These authors’ words helped me through a year of personal and professional failure.   They provided bright spots on bleak days and a few moments of escape, while I regrouped.  I will be forever grateful.

My “daughters,” Kristen and Sammy, and I solidified our bond and I look forward to meeting them in a few short months.  They are some of the strongest women I know and unbelievable examples of motherhood.  I thank Julie Richman for writing the books that brought Kristen and Sammy into my life.

Hayson Manning’s books brought this sumptuous Kiwi goddess into my life.   She has been an amazing Facebook pen pal, whom I hope to meet someday soon.  We have a date on a beautiful island in the South Pacific to sip frosty beverages and ogle gorgeous, shirtless, alpha men.  For research purposes, of course.

Julie Leto, whose work I have admired for many years, joined the ranks of independently published authors with her Dirty Dare novellas, which have recently been released as one novel Dirty Dare (Sexy Suspense Novel).   She has been writing intelligent, strong female characters for many years and I highly recommend her work.   (I hope I don’t lose my fangirl mind, when I meet her in 2014, for café con leche.  I really have loved her, since the old Blaze days at Harlequin.  And, I do mean old days.)

Military romances, a longtime passion of mine, also featured predominantly in 2013 and I read books by Heather Long, Tonya Burrows, Kelsie Leverich, Bella Juarez, Jeanette Murray Melissa Schroeder, Laura Kaye, Kaylea Cross, Cristin Harber, J.M. Madden, Tawny Weber and Ann Mayburn.    Many featured Veterans finding, and keeping love, while dealing with the aftermath of their service, like PTSD and injuries sustained in combat.   These women write with an understanding and deep respect for men and women in uniform and I am excited to read their offerings in 2014.

Towards the end of the year, I “discovered” Robin Covington, Avery Flynn and Kimberly Kincaid or the “Man Warriors.”  I was drawn to their quick, yet snarky, senses of humor and began to read their books.  I was not disappointed, as their characters reflected each one’s unique style and attention to character development. 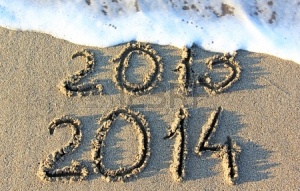 My other constant companions were Hubby and our K9 kids.  They kept me sane, grounded and made me laugh when I could not and smile when I thought I would drown in my tears.   I am blessed to have them in my life.  Hubby, your gentleness, strength and patience knows no bounds.  I love you more today, than the day I married you.

Why Hello, 2014…you’re a sexy beast.  Sit right down here and let’s get to know each other, shall we?