I’ve been a fan of Bella Juarez’s for several years, having become addicted to her “Black Ops Brotherhood,” series. She was one, of a select few authors, who featured strong Latinas as heroines, in a sea of “New Adult,” early-20-somethings mania.

Bella’s characters were unique in that they were “Everywomen.” Many were middle-aged, yet in the prime of life. They were intelligent, confident, and fully embraced themselves as sexual beings…with some scorchingly sexy, strong men at their sides.

I am looking forward to the “Dominant Persuasion” Anthology, and “Out of Touch,” in particular, because it is based in my stopping grounds of the Tampa Bay area. I’m interested in how Bella handles the dynamic between a Domme and her gentleman love, who just happens to be a Dom. It should make for an erotically good time! Can’t wait!

Bella’s idea of a perfect day starts out…

I added my own advice as a reader who pays close attention to ALL reviews, and is a member of several Street Teams.  Do not send your Street Team to harass ANY reviewer, “dislike” or “vote down,” and/or leave “helpful comments” for the reviewer. Do not post an angry rant on your Facebook page or blog, decrying negative reviews. Say nothing. Do nothing. It all reflects back on the author and her/his good/poor judgment.

Here is the 36th installment of Ten Top Lists of What Not to Do by Marie Ann Bailey of 1WriteWay at http://1writeway.com and John W. Howell of Fiction Favorites at http://johnwhowell.com. These lists are simu-published on our blogs each Monday. We hope you enjoy. 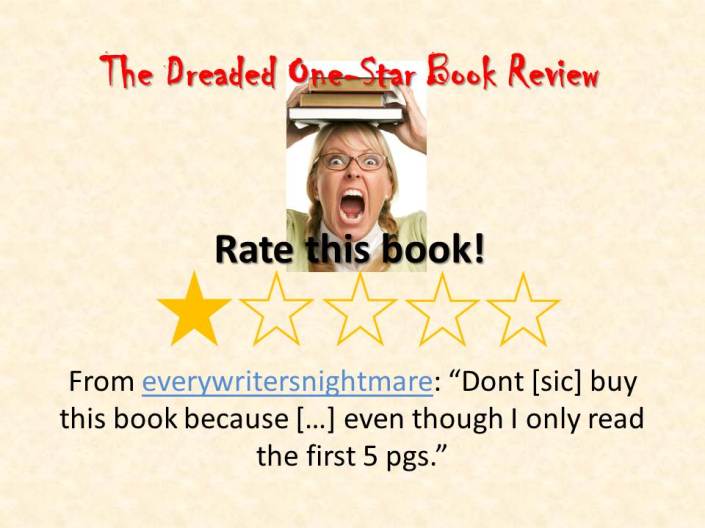 10.  If your book gets a negative review, do not read the review, especially if the rating is one star.  At best, the reviewer will admit the review is based on having read only a couple of pages of your book and you can chide yourself for even bothering to read one word of the review.  At worst, you will read the review so many times  you can quote it by heart, begin to believe it, and eventually get one star tattooed on your back to atone for imagined errors in your career choice.

9.  If your book gets a negative review, do not respond…

Penny Sansevieri summarized trends that authors need to understand, in order to remain competitive in a changing digital age.  Everything you write, how you interact with readers and how many products you release are part of your brand.  Be sure they all present a cohesive picture.

This entry was posted in Blogging, Book Reviews, Books and Authors, Food for Thought and tagged authors, books, ebooks, marketing.

The Slippery Slope Between Fanfiction and Plagiarizing an Author’s Work

Fan fiction has existed alongside storytelling, throughout history.  My undergraduate Shakespeare courses featured heated discussions on whether or not The Bard’s plays were homages to, or plagiarized copies of  “Plutarch’s Lives of Noble Grecians and Romans.”  The similarities were uncanny, to say the least.  Another infamous case involved a college student who had a “photographic” memory and plagiarized a popular, “darling” series about six or seven years ago.   Authors are influenced by stories they read or hear, but most acknowledge their sources of inspiration, either in their writing or in interviews about their books. 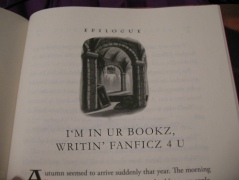 Recently, one of the biggest fan fiction “success stories” rose out of anonymity and became a household name.  She re-wrote an incredibly popular Young Adult (YA) series, based in Washington State, into one of the best-selling trilogies of the past decade.  By changing her story substantially, the fan fiction author ensured it would not be confused with the original.  She further set the right example, by explaining that the YA series was her inspiration.  She went on to self-publish her series, and continues to profit from it.

I read both series.  I am not a fan of YA (or its older, sexed up cousin, New Adult (NA)) novels, but the original was a sweet, well-written set of stories.  The author captured the angst and irrational emotions of hormonal teens, experiencing their first loves.  My twelve-year-old self would have LOVED this series.  My 45-year-old self thought it was “cute” and perfect for its tween/pre-teen/teenage demographics.   It was spun-off into movie series juggernaut that propelled the actors into the stratosphere of stardom, and brought more attention to the book series.

The fan fiction series, however, left a lot to be desired.  This author kept the location as Washington State, only moving the action to the city of Seattle.   The characters are chronologically older, but less mature.   The stories are entirely too wordy and should have been condensed  into one book.  The action is decidedly more “adult,” in that the characters engage in sexual activities that incorporate an alternative lifestyle.  Sadly, the author did not research this lifestyle thoroughly.   She failed miserably in conveying the three key tenets of this lifestyle in her work: safe, sane and consensual.   Be that as it may, this series has provided a venue for adults to discuss sex in a more open, provocative way.   That is a good thing.   This series has been greenlighted and could be in theaters next Summer (according to Perez Hilton’s website FSOG Movie Deal).    No comment.   (It’s already been done.  Just watch the movie Secretary, starring James Spader and Maggie Gyllenhaal, then come back and tell me about it…you’re welcome).

With all that off my chest, I arrive at the reason for my post today.

Plagiarizing another person’s work, is STEALING.

I am not accusing the above unnamed authors of stealing, because clearly they did not.   Unfortunately, not every writer of fan fiction is honest, and the number of plagiarized works is growing at an alarming rate.  Perhaps the plagiarists were always there (i.e., Shakespeare, etc.), but the Internet seems to bring out the worst in people.  The lure of fame, money and/or greed by taking someone else’s hard work, changing the title and a few names, adding your name as “author,” and releasing it to an unsuspecting public, is magnetic.  And illegal.

In the past two weeks, some super sleuth book bloggers/reviewers uncovered at least five plagiarized books being sold as “original works.”    These people were not professionals who worked for publishing companies, simply fans of books, who noticed uncanny similarities to books they had already read.  Furthermore, several had hosted the thieves on their blogs to PROMOTE the plagiarized works.   Not only were the bloggers/reviewers duped, they knew they inadvertently “helped” hurt other authors they cared for.   I believe they, along with the wronged authors were innocent victims of liars and thieves.

Teresa Mummert provides a great chronology on her blog, for those who like to follow the bouncing ball “Plagiarism” from Author Teresa Mummert’s Blog

I started this post as a cautionary tale, but it is not.  If you choose to steal another person’s work you are a THIEF, and deserve the world of hurt that accompanies legal action against plagiarists.  It is a fantastic way to destroy your life and credibility, immediately, so HAVE AT IT. Just know that the Internet is forever.  Fans of books are a smart, resourceful, loyal community who protects its own (authors and books) and we will find you.

My advice: write the stories that live within you.   Place your characters in worlds of your own creation, but write what you know.   Then, give credit where credit is due, for your inspiration.  Thank the authors who write the stories that move you, by buying, reading and promoting their work.  Not by copying and pasting it into a new file, and calling it yours.

You are more interesting than you think you are, and your story has not been told…by you.  So write it.