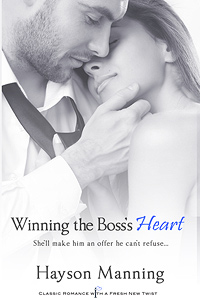 Mason Christian has twelve weeks to flip something old into something new, and then he’s getting the hell out of Footsteps Bay – a tiny New Zealand coastal town. Not even his temporary secretary and personal assistant–the feisty, luscious Billie McLeod–will deter him, but there’s no denying she makes him feel alive. More alive than he’s felt in three years…
Billie has one dream: save enough money to finish her degree. That’s why she’s agreed to work for hard ass, all-business-no-pleasure Mason Christian–a man who has every intention of destroying through modernization the town’s most cherished historical home. Before she can say ‘see ya’ she’s signed on the dotted line and is contractually bound to be Mason’s forty-second assistant. But working with male perfection every day is awesome with a capital A–as long as they can stick to a hands-off policy that gets harder every day…

42 Gives Magic Man the Last Offer He Will Ever Refuse

With her second book, Winning the Boss’s Heart, Hayson Manning took us to her beautiful home country of New Zealand.   Set in the bucolic coastal town of Footsteps Bay, Mason Christian hired Billie McLeod to work as his personal assistant on a project he hoped would be completed quickly.

Billie was a heroine who knew her own worth.   After suffering some personal setbacks, she was saving money to finish her degree, and working for Mason seemed like the fastest way to earn the most money.   She fearlessly challenged Mason and the sarcastic nicknames she created for him, were inspired.  Nothing like treating the boss with the same impersonal disdain, as he treated his employees.

Mason was a deeply broken man, sublimating his emotions in his work and keeping people at arm’s length.   As his feelings for Billie grew, he was forced to confront some painful events from his past.   Little did Mason know that fate would intervene, to give him a compelling second chance at love story.  Ms. Manning beautifully constructed and sensitively handled, Mason’s heartbreaking past.

Billie and Mason’s interactions ran the gamut of emotions from trepidation, to antagonism, to friendship, and finally, acceptance, and love.  Lovingly meddlesome townsfolk and growing spicy, sexy action rounded out this terrific story.

Links to my review on Amazon and Goodreads.

Hayson Manning grew up in a small New Zealand town in a family of scientists and engineers Hayson was told firmly that her ‘day dreaming’ phase would end. Soon, she’d be entranced by the inner workings of the periodic table and be spellbound by quantum physics. But Hayson loved living in the lands she created. Oh, the creatures that stopped by. The princes and princesses, unicorns and Frank a friendly chain-smoking shark.

It soon became apparent Hayson wasn’t going to be awarded the Nobel Prize for services to the atom.

She conformed and has worked as a demon word processor, sliced ham in a delicatessen, sorted freight, pulled midnight shifts in a bank and counted baked bean cans in a stock-take. She never stopped dreaming of writing alpha dudes and sassy woman.

She’s lived in Auckland, Brisbane, Melbourne, London, California and is now in Sydney. All she ever wanted to do was write fun and flirty people who aren’t perfect but will fight for that one person who will love them for who they are.

Represented by Nalini Akolekar of Spencerhill Associates, that dream has come true, writing for Entangled Publishing. She loves a good glass of wine, dreams of winning the lottery, cries while watching Antiques Roadshow and cannot speak she’s sobbing so much by the end of Undercover Boss. She is also an expert at finding new and inventive ways to avoid exercise.