On My Faith and this Election

Goldie Taylor’s latest article for the Daily Beast, Donald Trump Is Exposed, And So Are the Republicans Who Are Sticking With Him, demonstrates the hypocrisy inherent in the extreme right-wing of the GOP,  and their “do as I say, not as I do” holier than thou cavalier attitude towards their Christianity.

“But no principled, Christian conservative can justify backing a thrice married, serial philander who essentially confessed to sex crimes. However, this race was never about principle. It was never about Republican themes like small government, personal responsibility or family values. From the start, Trump’s campaign has been predicated on sexism (and ethno-nationalistic racism). It is and always has been about white male resentment and anguish. Trump bottled that antipathy—for women and minorities— and put it on a chartered flight to Iowa.”

There IS a choice for voters of Faith who believe that we ARE our brothers’ and sisters’ keepers. A candidate who has raised an intelligent, poised, confident, loving daughter; who remained faithfully married to an adulterous husband for 40 years; who has championed the rights and protection of children her entire life; and who has been an outspoken advocate for women, People of Color, LGBTQIAP people, military personnel, Veterans and their families; and people of all Faiths and beliefs.

HER name is Hillary Clinton and we KNOW what her credentials are.

You can vote for the GOP nominee, who is the very personification of the “ugly American” – undisciplined, greed-driven, arrogant, ill-prepared, unhinged, deranged, impetuous, irritable, pathologically unfit, and fundamentally dangerous. 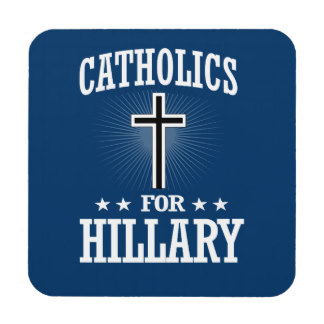 Or you can vote for Hillary Clinton. Third-party candidates are simply not an option.

We know Mrs. Clinton’s record. We know that ALL of her Democratic primary opponents have not only supported her candidacy for President of the United States, but are campaigning on her behalf.  That says more about her character and their respect for her, than the slickest political advertising.

So, my fellow voters of Faith, it is time to search your hearts and spend time meditating on the teachings of Jesus.  Then, take a close, long look at His actions, the people he surrounded Himself with and those He ministered to.

Then, ask yourselves which candidate more closely embodies those ideals. She needs our votes in November. She has EARNED our votes.

Thank God, and may our Blessed Mother guide and keep Hillary Clinton safe from now, through Election Day and her Inauguration.  Use your voice and vote for Hillary Clinton to be President of the United States. She is the RIGHT choice. She is the ONLY choice.

As a Roman Catholic Latina, #ImWithHer and you should be too, because we Americans are #StrongerTogether.

How Hillary Clinton’s Presidential Campaign Is Personal to Me

Whether you support Sec. Clinton or not,  take a close look at the adjectives used to describe her.  Commonly used are words like “b#tch,” and those words you would never say to or about a woman, in polite conversation.
Far too many of us – women in workforce – recognize some version of the inappropriate language used to speak about Sec. Clinton, because we have either been subjected to it or have been bystanders as another female coworker has been subjected to it.

My VERY FIRST week, at my first professional job, was spent “revisiting” Personnel policies and sensitivity training, because a male supervisor had sexually harrasssed a female subordinate to such an extent that he should have been fired on the spot.  He was “encouraged” to resign.  She quit soon after.  Then the incident as swept under the rug.  It was the mid-1990s.
This process is called systemic misogyny.

My vote in November will be for Sec. Clinton, because as President Obama stated, “I can say with confidence there has never been a man or a woman more qualified than Hillary Clinton to serve as president of the United States of America.”

Michael Hulshof-Schmidt, from And Social Justice for All, provides a male perspective in his latest blog post (below).

Let me be as candid and transparent as possible: I was a very strong supporter of Bernie Sanders, and until the past four weeks, held out great hope that he would become our next President. Over th…

Courage, Grace and Strength Under the Most Insurmountable Odds

Trigger Warning: This post, and the article shared, feature a rape victim’s frank and explicit statement to the man who raped her.  Please share with women and men, responsibly.

I have written about serving as an adviser to a college sorority for many years.  The experience forever changed me as a woman.

One of the most difficult subjects I encountered was how to frame the conversations around sex and consent.  This was before colleges and universities recognized rape, sexual assaults, sexual batteries and every point on that continuum as a violation of a student’s rights, according to the school’s own policies.

How I wish websites like Consent Is Everything had existed to give me tools on how to broach this delicate subject.  How I wish I had known what constituted consent when I was a college student. I would have recognized that I too was a victim of acquaintance rape.   And I would have known that it is far more common than we can imagine.

But, what happens when a brave young woman comes forward to share how she was unimaginably violated by a “star athlete?”  Why does she have to justify her actions, when he was the one who committed rape upon her?  Why is she the one whose morals and character are called into question?   And, how does she react when faced with the reality that his “status” may have ensured preferential treatment by the justice system?

What happens is this brilliantly heartbreaking victim’s statement, as shared by Buzzfeed’s news reporter, Katie Baker Here’s The Powerful Letter The Stanford Victim Read To Her Attacker.

To the woman who stood strong, surrounded by people who loved and supported her, I say – your mission in life is ahead of you.  Each time you speak truth to power, you are helping another person.

To Brock Allen Turner, I say – may Karma find you. Repeatedly. For the rest of your miserable life, you rapist.

Join 3,392 other subscribers
Follow Reading, Drinking and Dancing with a Chaser of Snark on WordPress.com